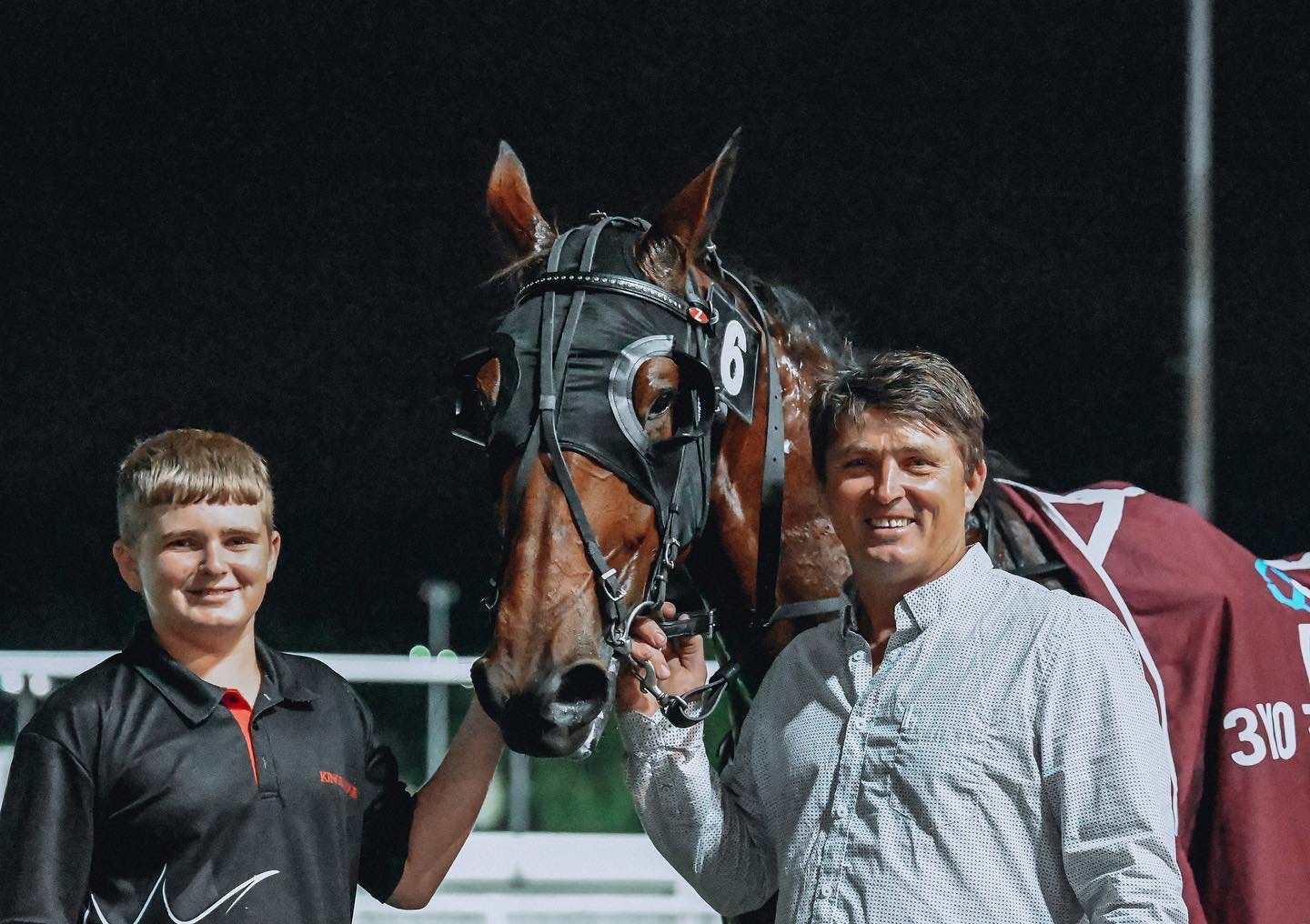 The season-on-season winning tally for the Graham Dwyer stable has sharply risen in each of their last four campaigns.

And, it is no coincidence that just as the winners have flowed, so has the involvement and ability of Dwyer’s young son Layne as part of the team.

Just 14 years of age and still completing his high school studies, Layne Dwyer is a keen driver in the harness industry, aiming to turn his dreams into a career in the coming years.

Layne idolises leading Sunshine State driver Pete McMullen and works the majority of the Dwyer stables pacers at their North Maclean stable in the morning before heading off to school.

Layne and Graham, as well as wife Martine Peters, have put the finishing touches on stable mates Harps, Longueval and Valencia ahead of heats of the inaugural Group 2 Peak Of The Creek this Thursday evening, which will provide horses with a National Rating from 55-70 with a $50,000 Final.

The first ever Peak Of The Creek is a part of the 2021 TAB Queensland Summer Harness Racing Carnival.

The 47-year-old trainer is hopeful Layne is on the path to becoming a professional driver as he hones his skills around the stable and with regular conversations with McMullen.

“I just want to be very supportive of him because it is not easy to get established in this game,” Graham said.

“If I can get that bit right, the rest is up to him as I am sure he will work hard.

“He wants to do it and as long as he keeps that eye on the prize and keeps working hard, I am sure he will be fine.” 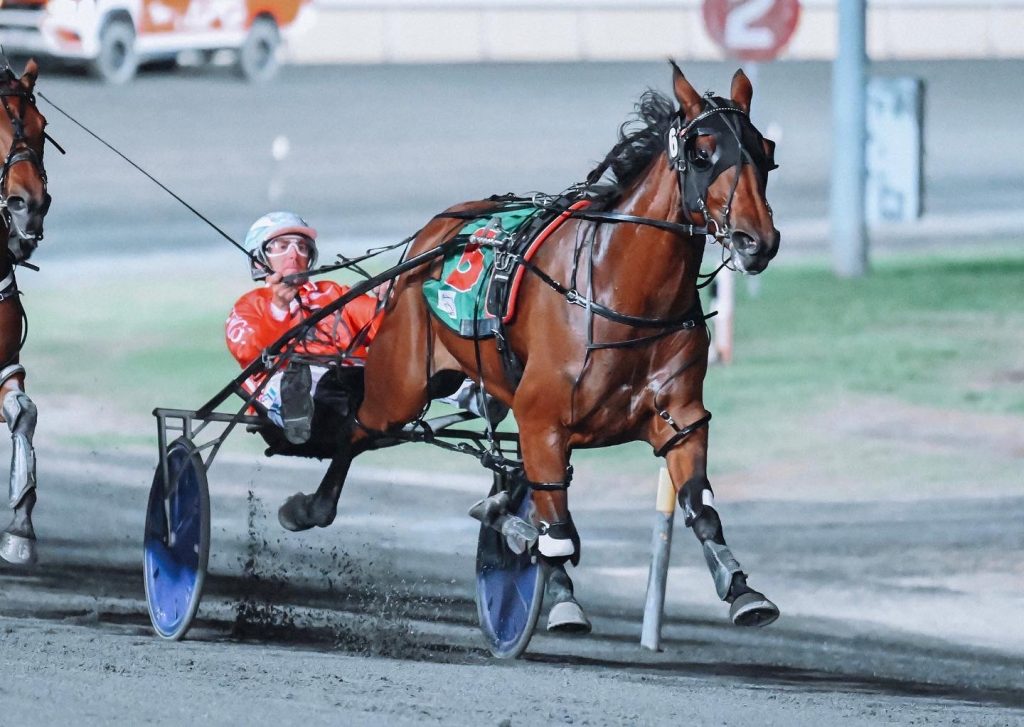 The ambitious teenager looks to McMullen for guidance as he believes the top Queensland reinsman is a positive person to be around that often learns form his own mistakes in the sulky.

“I am just trying to learn to drive more so, usually with fast work every second day, it is pretty good,” Layne said.

“It is a good career to be in really – hopefully I can get good opportunities and then if you  do that, you are pretty much away.”

The Dwyer team cracked a ton of winners for the first time last campaign, finishing on a sparkling effort of 110, after rising from 49 winners the year before and 17 the season before that.

They are edging closer to 90 as November commences in 2021 with plenty of winning chances to come.

Their property has space for 30 horses which includes a swim, walker and good work area as well as big paddocks and yards, with most of the prize money that comes from winning races quickly reinvested into the stables facilities to the benefit of the pacers.

Outside of the influence of young Layne, the Group 2 and 3 winning trainer believes the last few years fortunes have been a culmination of more than a decades endeavours from his family and stable.

“It has been good reward for all the effort and effort from the 15 years before that, everything is starting to come together,” Dwyer said.

“We have a young family that is starting to grow up and is being a part of what we are doing as well.

“We are winning races with the average horse and we are not afraid to go wherever we need to go to win a race, every horse is doing their job. 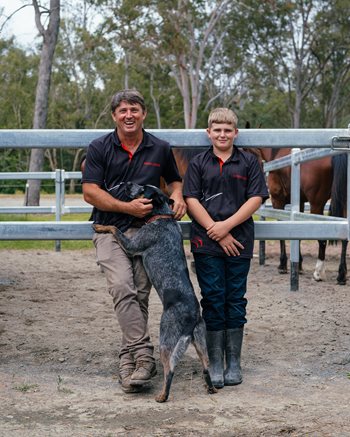 “We are winning races with the average horse and we are not afraid to go wherever we need to go to win a race, every horse is doing their job.

“I have learnt from my mistakes in the past and now I have the right people around me, owners especially, it’s important to have people around you that think the same as me and be driven, we are hungry to win.

“We want to do well in the sport and be a part of the sport for a long while.”

The Dwyer team are now on the hunt for higher class horses, declaring they have worked hard to get to where they are in the industry now and they just want to continue to build on it.

The stable are looking forward to the Group 2 Peak Of The Creek heats this week, hoping to be a major player in Saturday’s final with three engaged – Longueval, Harps and Valencia.

The unique Peak Of The Creek will see heats contested two nights prior to the Final, with connections then able to select their own barrier based on individual horse times run in the heats.

The team at BPM Bloodstock own all three of the Dwyer chances with Graham noting they have been big supporters of their stable for some time.

“BPM Bloodstock has got some big syndicates involved with those and we had a big winner the other day with Harps, which was good,” he said.

“We have these three in and if they can get the right runs and have a bit of luck, I think we will be a chance.”

Longueval and Valencia are relative newcomers to North Maclean with Layne remarking Longueval has spent plenty of time in the water walker of late while Valencia has settled in well.

Gelding Harps got the money up at Redcliffe on Wednesday of last week and Layne feels he will be competitive come the heats on Thursday evening.

“I gave him a light jog on Monday, he seems to have pulled up well after he won the other day and he cantered on Saturday,” Layne said.

“Hopefully everything can go his way on Thursday night.”

The barrier draw for the inaugural $50,000 Group 2  2021 Peak of the Creek Final this Saturday will be completed in a unique way following the four heats on Thursday night.