KASHED UP RECEIVES WILDCARD INTO THE RISING SUN

Exciting NSW three-year-old Kashed Up has received the final wildcard into next week’s inaugural running of the Group 1 AQWA Constructions The Rising Sun.

Fresh off victory at Albion Park last night, the Gemma Hewitt-trained gelding, who ran third in last week’s Redcliffe Derby behind Krug, will take his place in the 12-horse field and will benefit from the preferential barrier on offer.

A new addition to the Australasian harness racing calendar, The Rising Sun will see $250,000 go on the line for the best three and four-year-olds from both sides of the Tasman.

A further $100,000 bonus is on offer should a three-year-old win the feature.

With Krug confirmed for Cran Dalgety, Kashed Up snared the remaining wildcard after the connections of Patsbeachstorm opted to decline the invite offered to the NSW Derby winner.

Having watched Brendan Barnes steer Kashed Up to victory at The Creek last night, Hewitt said she was looking forward to chasing Group 1 glory with her star three-year-old.

“With a nice barrier, he won’t be out of place,” Hewitt said.

“Expensive Ego’s run (last night) was massive, while Copy That was very, very impressive. There were some exceptional horses.

“He’s just a little homebred fella, but he’s earnt his spot, and he just keeps on stepping it up.” 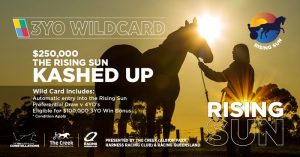 As it stands Kashed Up and Krug will draw for barriers one and two although this may change should another three-year-old be selected in the field, the remaining barrier positions will be drawn live on SKY2 from 6.30pm tomorrow night.

Copy That looked breathtaking en route to victory in the Wondais Mate Open Pace last night, storming over the top of a star-studded field that included Spankem and Colt Thirty One.

Expensive Ego also looked full of running for Luke McCarthy, claiming his eighth win from just 11 starts this season, while stablemate, Spirit Of St Louis, who is another Rising Sun aspirant, also chalked up his third win in succession.

Krug was simply brilliant last week as he smashed 0.8sec off the all-aged track record in the Redcliffe Derby.