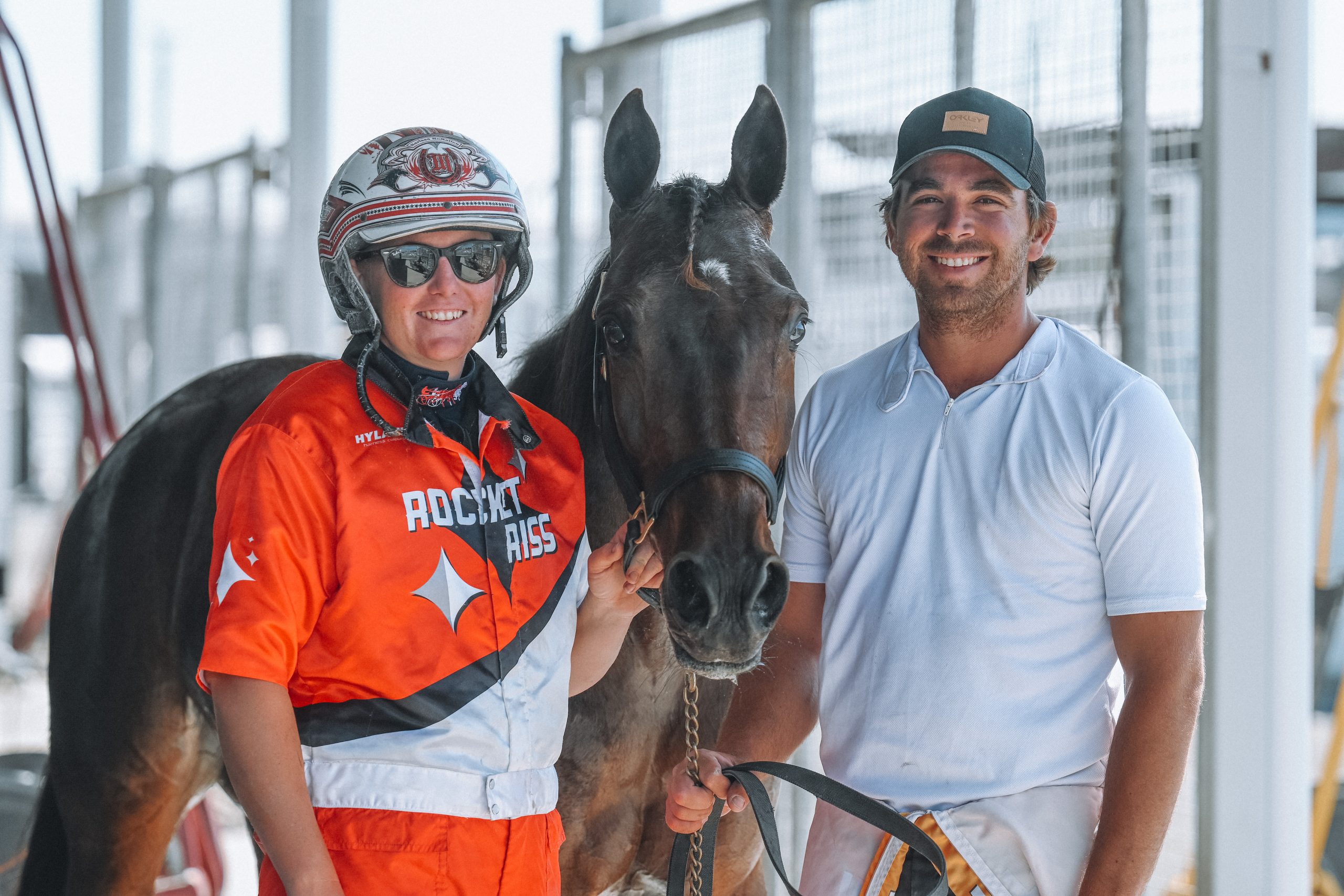 Around the stables he’s known simply as God, and he occupies stable 1A.

But amazingly, he’s only won a pair of races since being based in Queensland.

One of those races just happens to be a feature race he collected, back during the TAB Constellations in June at Redcliffe when successful in the Trotters Cup, defeating Our Overanova, Sir Fahrenheit and Claudys Prince in the stand start 2613m feature.

Godofthunder is a stable favourite of both Narissa McMullen and Matt Elkins.

The young couple were born into harness racing, with their respective families synonymous with the day-to-day dynamics, and they regularly appear in the winners list at all three tracks throughout the south-east of the state.

But as the fledgling relationship deepened, McMullen and Elkins decided to take it to another level.

They purchased a parcel of land at Coominya, nestled in the Somerset Region and situated about 80km west of Brisbane, where they’ve decided to establish their own piece of paradise.

With 70 acres of land, the property has quickly transformed into a fully functional harness racing complex complete with a 950m all-weather training track with boxes (4×4) and yards (10×20) multiplying at a rapid rate.

Collectively, the couple have driven more than 1550 winners while they have prepared more than 190 winners, which provides a perfect foundation for their current plan. 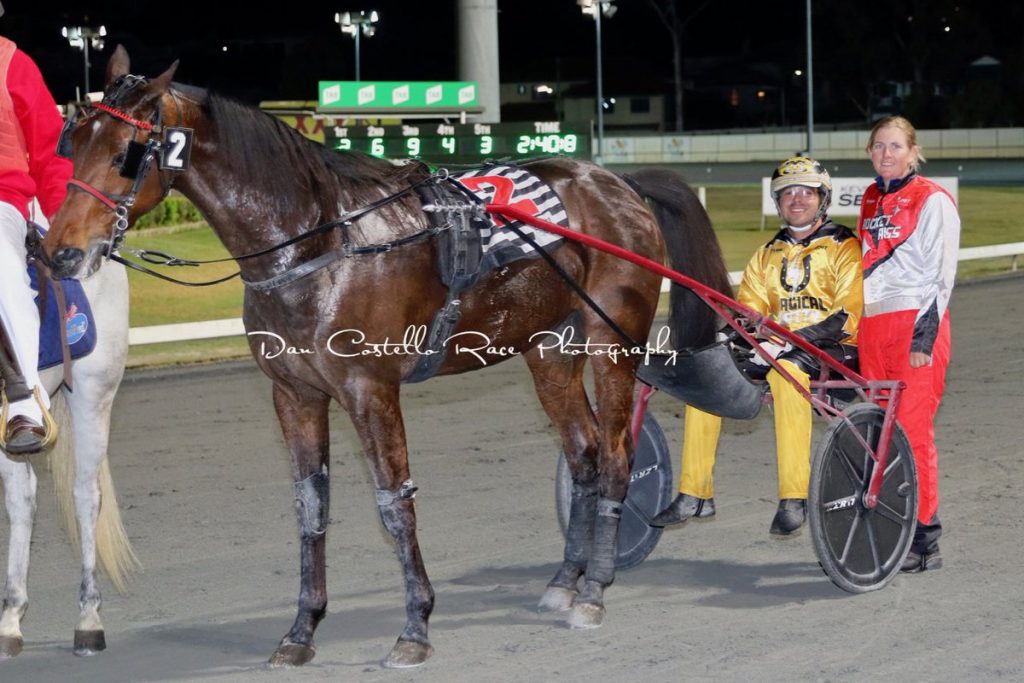 Currently, they have 20 horses in work.

While Ideal World and Paravani are the best credentialled pacers in the stable, it’s the trotter Godofthunder who garners plenty of attention.

“God is a favourite, there’s no doubt about it. Riss and I just think he’s a cool horse with plenty of charisma. He’s been with us from the start and that’s why he occupies the first stable you see when you walk into the place,” Elkins explained.

Arriving in Queensland last September, Godofthunder was sent north by his Adelaide-based trainer and co-owner Aaron Bain, who believed the change of scenery would be beneficial for the talented performer.

“He’s quite a laid back type, although he likes to be boss when he’s in the paddock with others. He’s a little fussy with his food while he’s basic with his shoeing and has aluminiums all-round,” McMullen said.

“As a trackworker, he’s lazy and normally just does the essentials. Most times he’s working by himself although he does work in with a few others every now and then. I do most trackwork with him and then Matty drives him on race night or vice versa in a bid to keep him switched on.

“He’s a foolproof trotter. Very reliable and easy to drive. His best asset is his manners, particularly at the start of his races when he gets away really well.

“It would be great if he had another length of speed. That’s his drawback.”

Bred by Victorian-based breeders Jack and Terrence Humphrey, the trotter hails from a strong family.

Godofthunder is by the Swedish stallion Yield Boko from the Samadhi mare Joyces Choice and is closely related to the former star juvenile performer Shegotsass, a winner of her first six starts before being beaten as a short-priced favourite in the Springboard 2YO Series Final behind Indefensible at Albion Park.

Another close relation is Shes An Image, a winner of 20 races and more than $230,000 while being the dam of exciting Evas Image (by Father Patrick) who boats three Group 1 placings to date.

Entered for the 2016 Australian Premier Trotting Yearling Sales in Melbourne, the bay colt was listed as Lot 31. He was knocked down to the bid of respected horseman Geoff Webster for owner Dominic Martello for $40,000—the second highest price at the sales.

The top lot at the sale that year was $47,000 for Kyvalley Frank (Majestic Son—Pinevale Ellason).

In recent times Martello has raced the likes of Wrappers Delight, Big Jack Hammer, Mach Doro, Malcolms Rhythm and Misterfreeze among many others.

Godofthunder started twice for Webster as a two-year-old and went winless before switching to the care of Mattie Craven.

In 11 starts for Craven, Godofthunder scored once when easily defeating his rivals at Horsham on February 4, 2019.

Since moving to the Sunshine State, Godofthunder has competed in two editions of the DJA Trotting Championship Series. He finished 13th (Majestic Simon) in the 2020 final while finishing fourth (Pink Galahs) in this year’s final.

“He’s had about 20 starts for us now and he’s never actually gone a bad race. His Redcliffe victory is the highlight, but we’ve still got two more targets for him and we think he can do both,” Elkins said.

“He’s going back to Redcliffe for the Xmas Trotters Cup in December, and we’re determined to win a race at Albion Park with him.

“The week before he won the Redcliffe Trotters Cup, he got beaten a whisker at Albion Park by Orlando Jolt (Adam Sanderson) and, upon pulling up, Adam said he’ll win the Redcliffe feature because he’ll be so hard to pass on the smaller circuit. If only we had more trotting races at Redcliffe hey?”

It’s one step at time for Godofthunder but there two achievable targets.