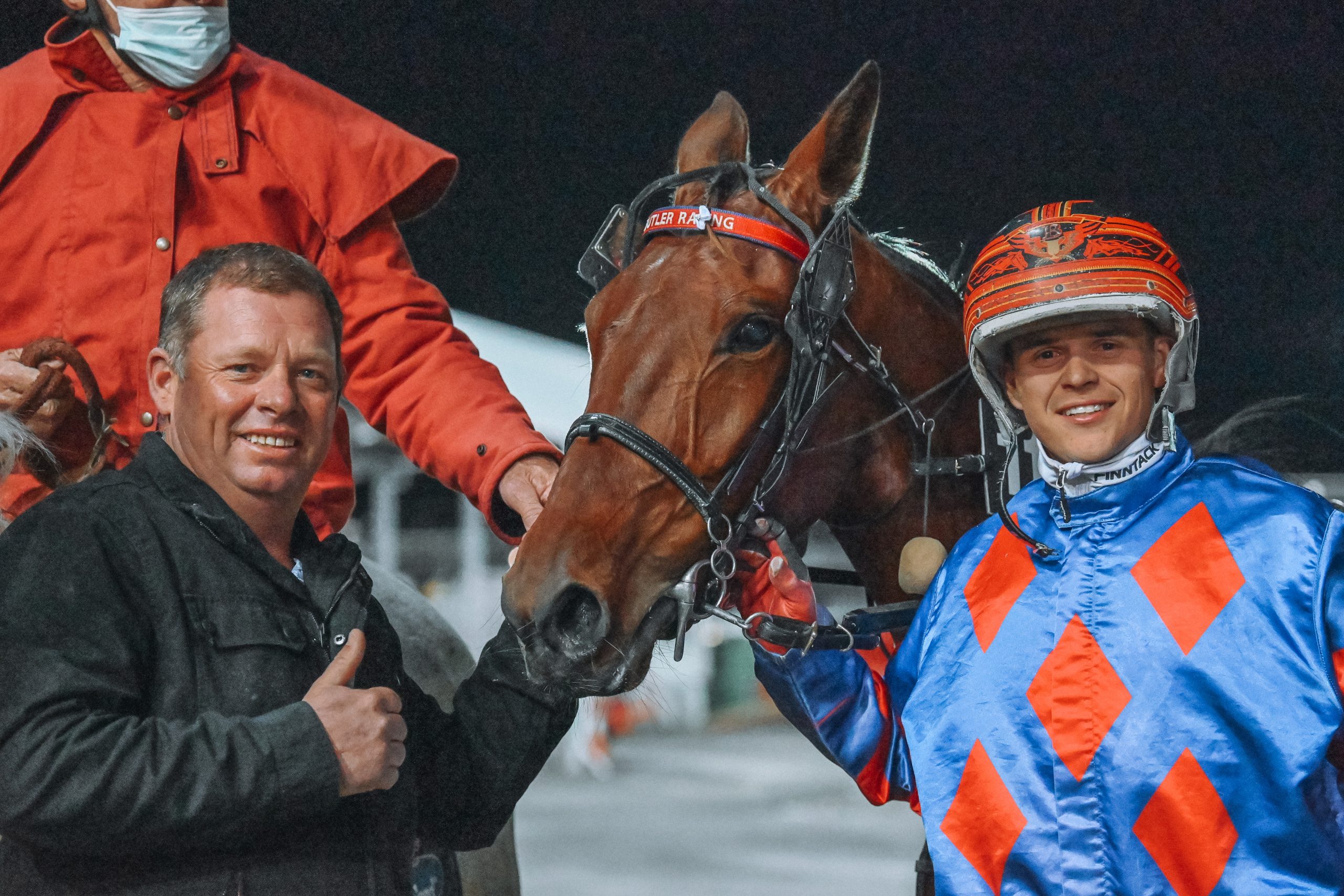 “It’s the best decision I could’ve made!”

That’s how Sydney-based owner/breeder Ray Cahill sums up his move on sending his star mare Jeradas Delight to Brisbane more than 18 months ago.

Under the care of astute Grenfell (near West Wyalong) mentor Mark Hewitt and rising through her grades, Cahill faced a potential dilemma on what his next move could be with his talented mare.

“All my mares are based with Jackie Gibson at Success Stud, and I’ve had a number of horses with Mark over the years. He’s an outstanding horseman but is based a long way from Menangle, so it’s taxing on both horse and trainer making those long trips. I needed to make a choice, send her to a Sydney trainer or send her elsewhere,” Cahill explained.

“I had my eye on a Menangle-based trainer, but he had quite a few mares all in the same grade so I thought that wouldn’t be productive. I had a good chat with Steve Turnbull, and he suggested I send the mare to Brisbane and Jack Butler.

“I’d never had a horse with Jack but Steve spoke really highly of him and I decided to reach out and get the ball rolling. My original plan was to break $100,000 in stakes and then bring her home to retire and breed from.”

Jeradas Delight finished as the runner-up behind Art Series in the 2018 Group 3 $30,600 NSW Breeders Challenge Regional Final at Bathurst while the following year, she finished third behind Rocknroll Pearl and Love My Sister in the Group 3 $30,600 Go Girlfriend Final at Menangle.

Making her local debut on July 18, 2020, at Albion Park, the richly bred mare made it obvious she was destined for bigger and better things when dominating her rivals in a time of 1:54.5.

During her first 10 starts, all at Albion Park, Jeradas Delight recorded three wins and five minor placings before having a break.

Upon her return in 2021, Jeradas Delight continued to mature and improve while maintaining very consistent form.

With TAB Constellations carnival looming, connections were eyeing the mares’ features including the inaugural running of the Group 1 $100,000 Garrards Golden Girl over the 1660m on the second night of the Albion Park winter carnival.

Jeradas Delight stamped her ticket to the big dance with an excellent second to Fame Assured in the final lead-up event, the Group 3 $30,000 Fleur De Lil Ladyship Stakes the week prior. 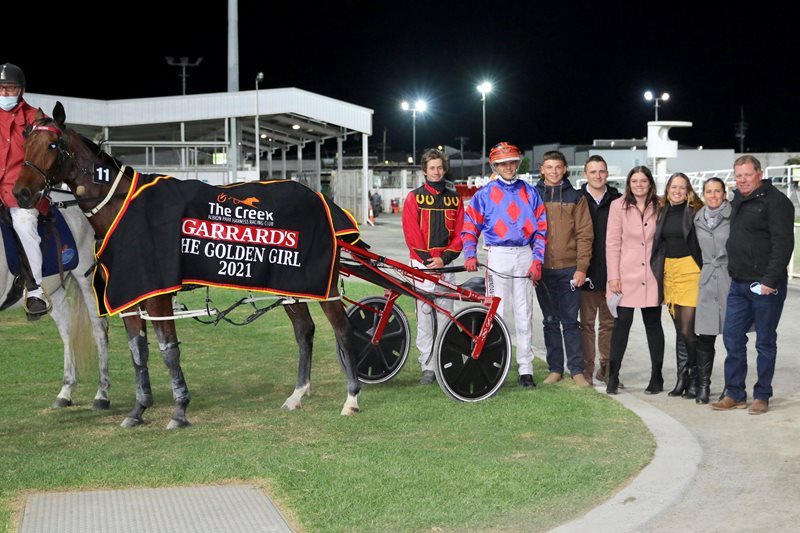 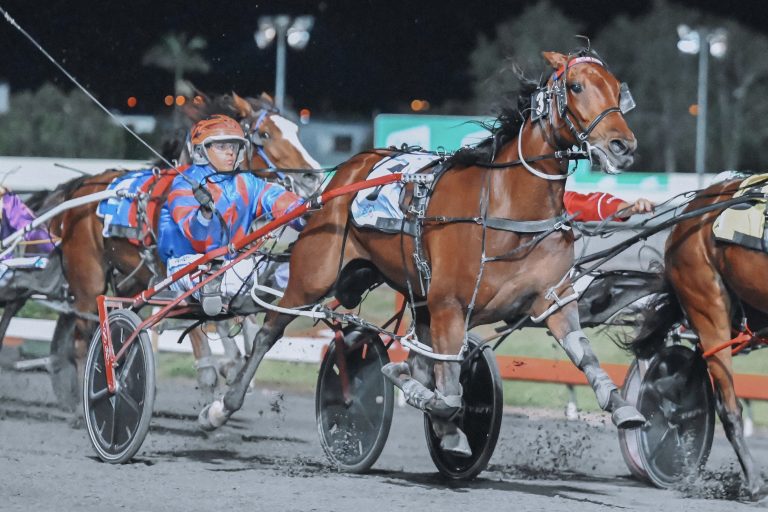 But any realistic chances of winning the Golden Girl were dashed following the barrier draw after the mare was left with gate 11, the outside of the second line in the 1660m event.

“Jack kept telling me she was going as good as ever, she just needed that little bit of luck and a nice draw. He was optimistic and hopeful of a great showing,” Cahill said.

“Once I got the draw, I thought ‘we can’t do it from that draw against these mares’. Remember, she was taking on the likes of Amazing Dream, Our Princess Tiffany, Spellbound, Better Enforce, The Stunning Nun and all the absolute best of the Queensland mares.

“In the lead-up to the race, I backed her for the place only because I honestly had no expectations. Owing to the Covid-19 lockdowns I couldn’t be trackside, so I was sitting at home in front of my huge projector TV screen with my fingers and toes crossed while hoping for the best.”

With Spellbound leading from the inside draw, the pace was a cracker with the first split covered in 26.3 seconds followed by a second quarter of 29.5 seconds, at this stage, Jeradas Delight is sitting last.

“I was screaming and yelling at the TV. It was the greatest moment I’ve had in the game and it’s just a shame I couldn’t be there. I remember talking to Jack straight after the race—we were both crying and so overwhelmed,” Cahill said.

“It proves that dreams can come true, in many ways, you must have the whatever happens will happen attitude in the racing game.” 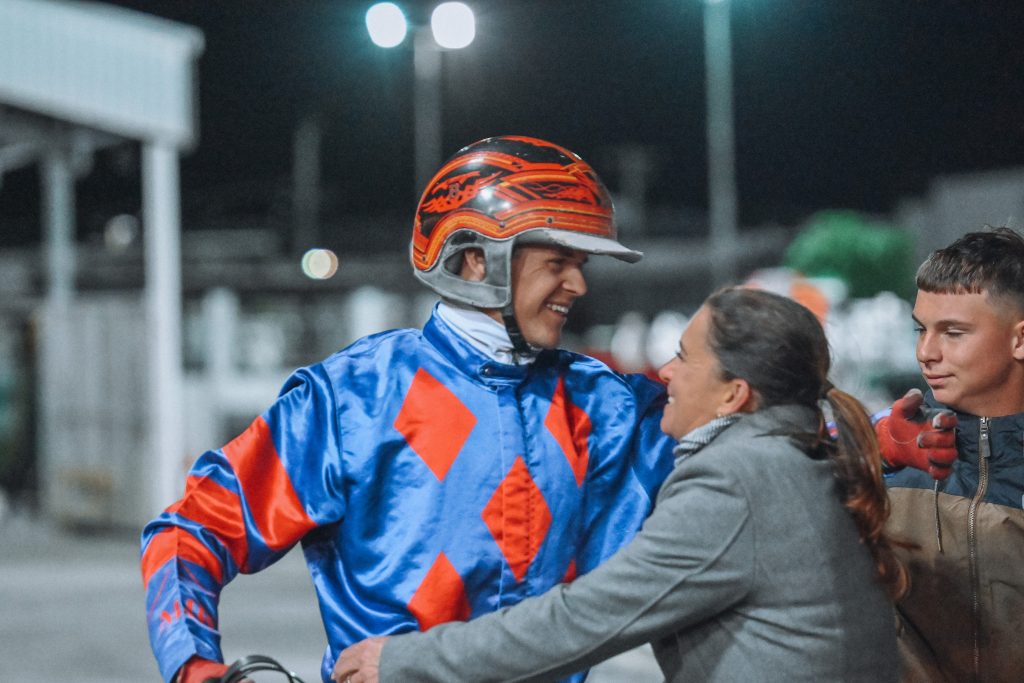 Jeradas Delight backed up the following week in the Grand Circuit event, the Group 1 $250,000 Blacks A Fake Queensland Championship but copped a nasty check soon after the start from race favourite King Of Swing and never recovered when finishing ninth behind Amazing Dream.

The thought of retirement never crossed Cahill’s mind, and he instructed Butler to keep her going with summer carnival features the next target.

Jeradas Delight scored another feature back in November when successful in the Listed $25,000 Queens of the Creek defeating Scarlet Babe and Wahs Fire Bug in a time of 1:55.2.

“It’s been a great ride and so much fun, I sent her north to break $100,000 and when she eventually returns, she’ll have more than $200,000 against her name and a Group 1 winner which is just unbelievable,” Cahill said.

“I breed to race and sell the odd one through the sales. I have six mares in total, but I actually gave away Jerada Ace away. She ended up with Alex Tout from Success Stud, but he’s offered her back to me and I’ll be breeding from her again.

“Jerada Ace has two Group 1 winners to her credit with Jeradas Delight and Bar Room Banta. I actually sold him for $26,000 at the Sydney APG Yearling Sale to Mick Stanley and his clients.”

Interestingly, Jeradas Delight has won nine races since being based in Brisbane with the promise of more to come.

And as it stands, Jeradas Delight is right in the mix to be crowned the 2021 Queensland Horse of the Year.

Now, wouldn’t that be a dream come true! 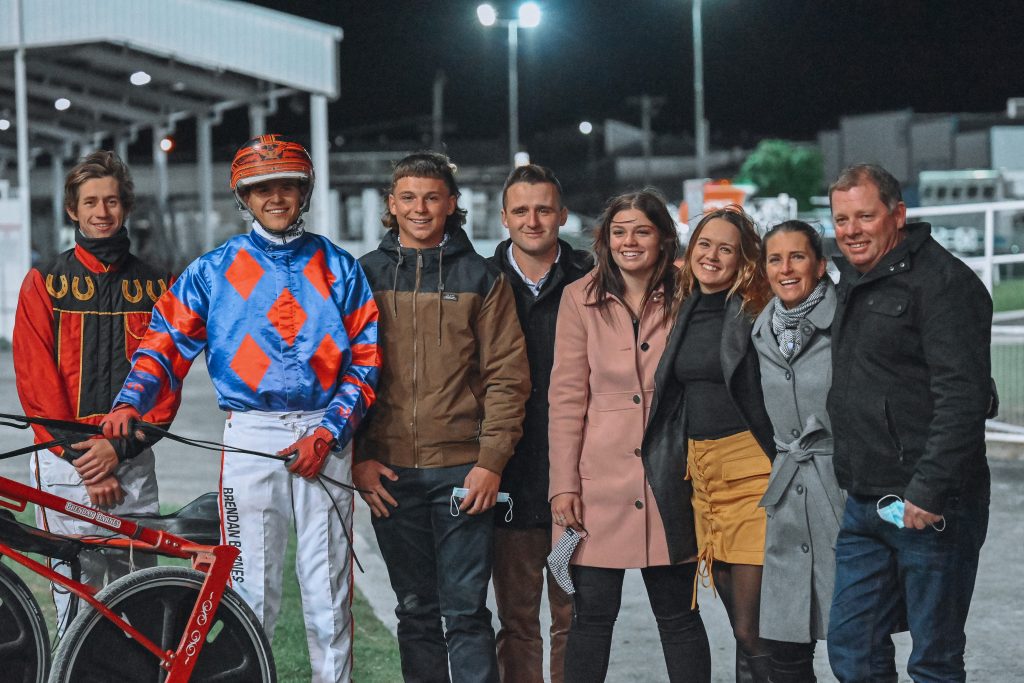 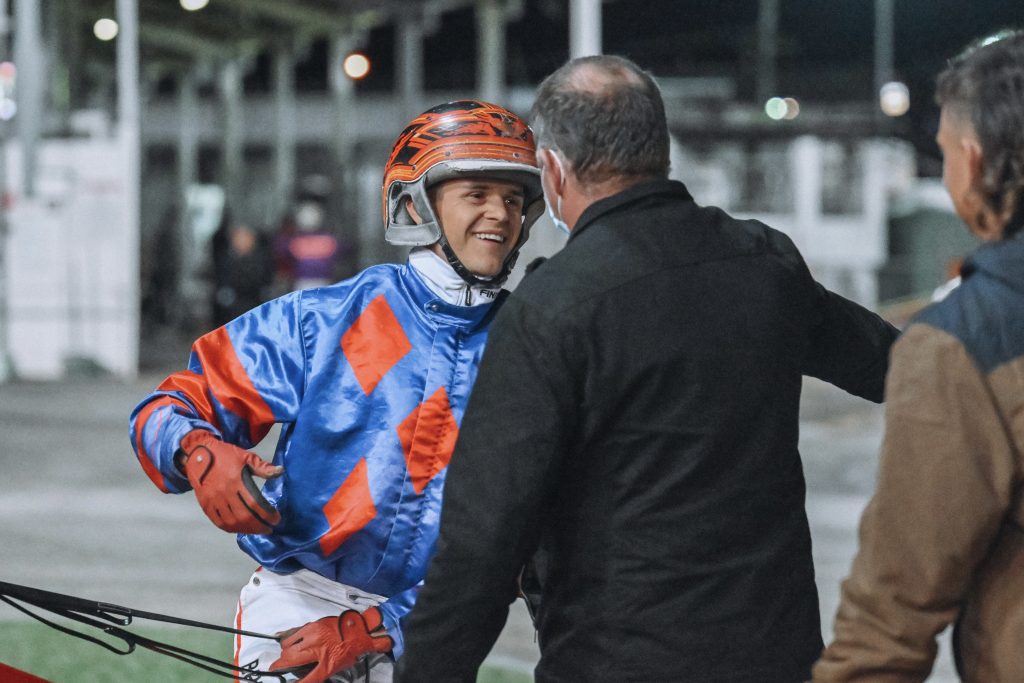 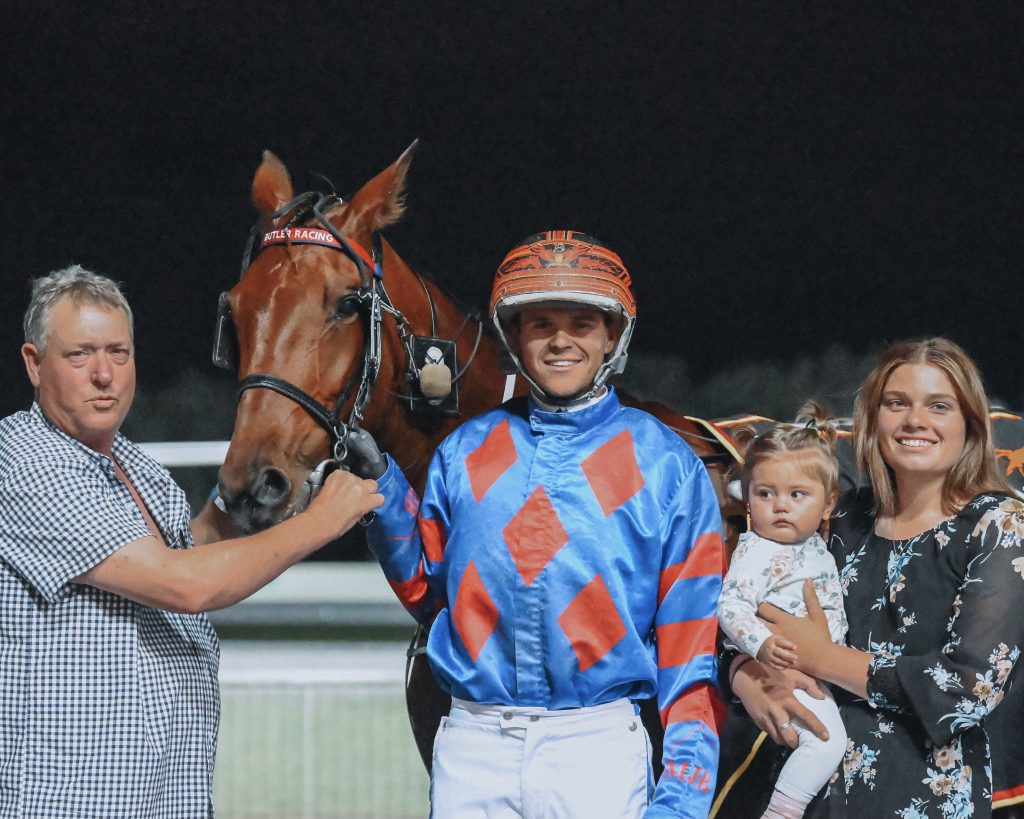