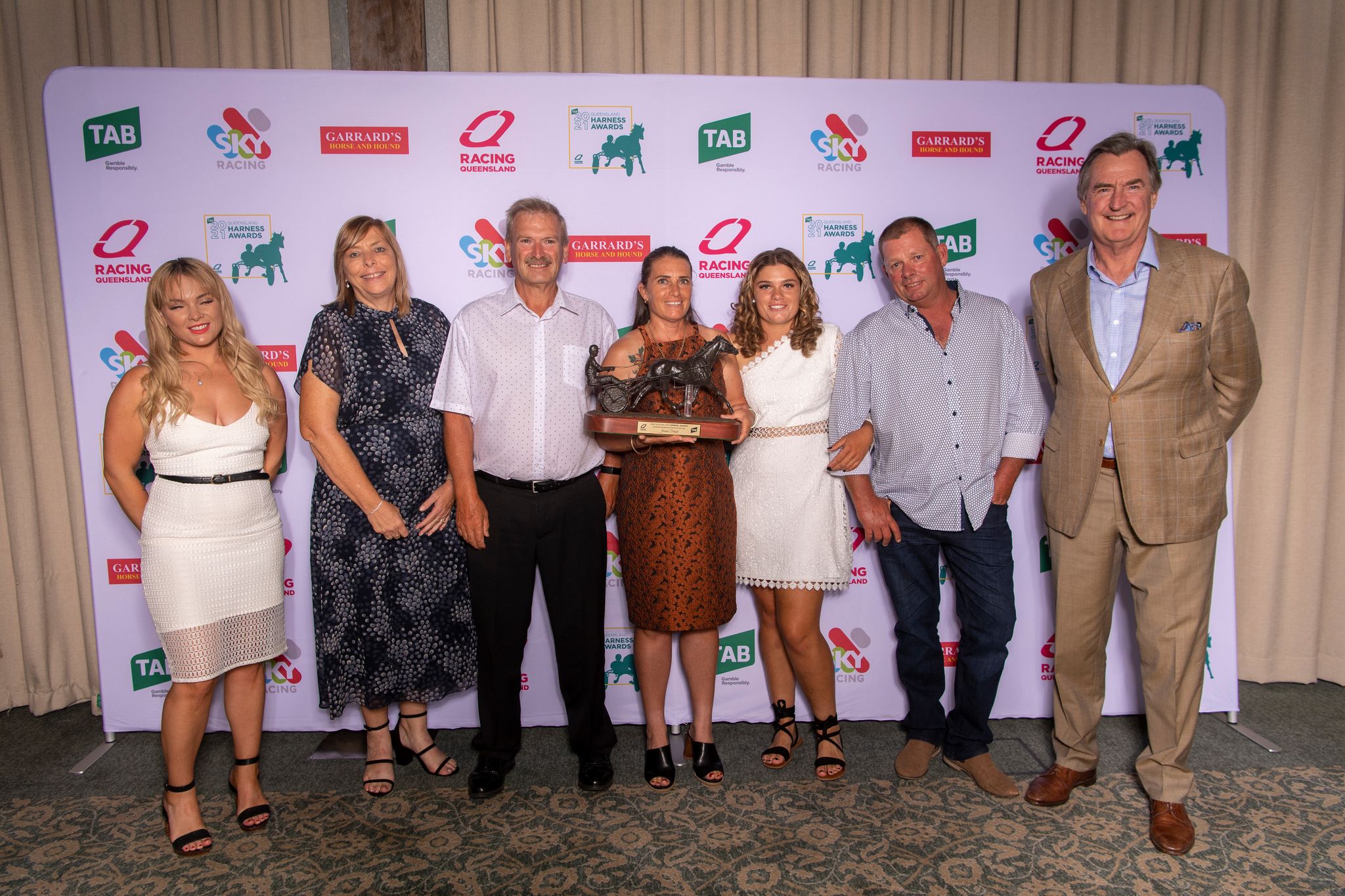 Around seven months on from Jeradas Delight’s stunning breakthrough Group 1 triumph, trainer Jack Butler believes The Golden Girl victory has taken his stable to the next level.

The Logan Village-based Butler – alongside his family – and regular driver Brendan Barnes as well as owner-breeder Ray Cahill took home a swag of awards on Sunday evening at the 2021 TAB Queensland Harness Awards in Brisbane.

The Bettors Delight mare claimed the major prize of the evening, the TAB Queensland Harness Horse of the Year, as well as being recognised as the Queensland Aged Pacer of the Year and the Garrard’s Queensland Filly or Mare of the Year.

The seven-year-old pacers 2021 campaign was underlined by winning the first-ever $100,000 The Golden Girl at the ridiculous odds of $151 at Albion Park. 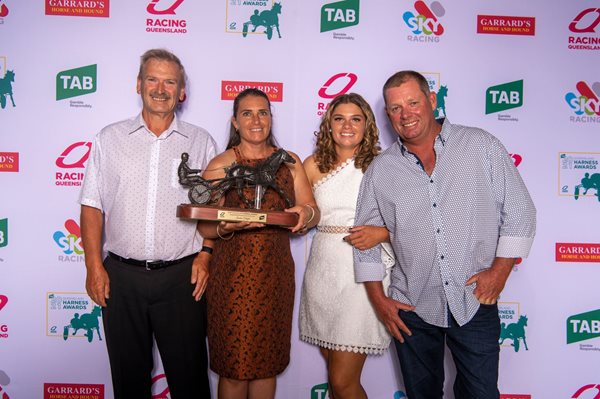 While Butler has trained a ton of winners in each of the last six campaigns, he thinks the maiden Group 1 title has lifted his barn to lofty heights in the Queensland harness industry.

“I think I have got a lot of new clients out of this, definitely,” Butler said at Howard Smith Wharves on Sunday night.

“We are going great at the moment.

“We just need to keep trucking along and just keep trying to get our next Group 1 winner down the line somewhere.

“We are going good and hopefully we can get the next Jeradas Delight soon.”

On top of The Golden Girl surprise, Jeradas Delight was also extra-reliable throughout 2021, having 24 starts – claiming six wins and six placings – as well as winning the Listed Queen Of The Creek, finishing the season with $120,877 in prize money.

The star mare recently had a short NSW campaign – targeted towards the Ladyship Mile – but after two luckless efforts, she is on the way back to Queensland with plans towards the 2022 TAB Queensland Constellations carnival.

With Sydney-based owner-breeder Cahill on hand to accept Jeradas Delight’s spoils on Sunday night, he and Butler have already discussed the mare’s stud career when she does eventually call time on her sparkling racing career.

“It is the biggest award in Queensland harness racing so it is massive to us,” Butler said.

“I have to thank Ray for giving us the horse originally, she has done a great job, given us our first Group 1 winner so it means a hell of a lot to us.

“It is absolutely amazing and hopefully it can keep going on from here.

“She comes back to us next week and hopefully we can do it all again this year.”

Brad Steele – chairman of the Albion Park Harness Racing Club – said events such as the 2021 TAB Queensland Harness Awards are integral parts of the industry, giving hard-working participants a chance to sit back and reflect on the season.

“It is a great celebration of the code and I think it is really important considering the year that we have had with all the COVID machinations and everyone has been so busy, we really have not had the chance to come together and unite as an industry,” Steele said. 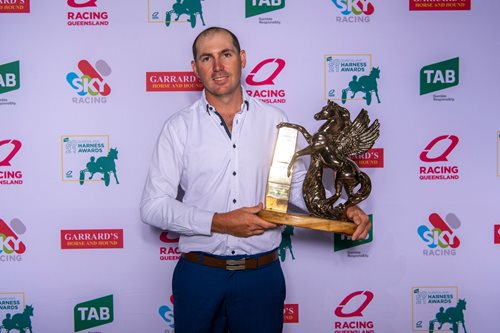 “It is a great opportunity to catch up with everyone as well as acknowledge the great people who have achieved over the year.”

While Butler and his camp took home the majority of the spoils on the horse front, from a drivers’ perspective it was once again the “Leader” Peter McMullen show.

The father of two – McMullen – was recognised as the Queensland and Australian Driver of the Year after becoming the first driver in Queensland to surge past 300 wins in a single season.

The voice of Queensland harness racing Chris Barsby was at the track to call a large portion of those victories and believes while 300 is a monumental achievement, the record could be soon one day be broken, potentially by McMullen himself.

“It is a head spinning stuff, being the first time a Queensland driver broke 300 wins in a single season and he got there comfortably in the end, with 315 being his final total,” Barsby said.

“Records are meant to be broken and I think in time that record will be broken but I think it will be some time before we see it done again.

“It was a whirlwind season, as so much time and effort goes into it.

“It is not something you set out to do at the start of the season and think, “I am going to go for this record”, it just happens.

“He went to a lot of meetings; he did a lot of work and travel and he came out with that record and hopefully he can hold on to it for a little while until someone else surpasses it.”

Reflecting on his record-breaking last year, McMullen joked that with all his major goals attained in 2021, he did not have any specific aims for the year ahead.

He said the McMullen and Chantal Turpin partnership had started the new season a little slow over the last six weeks but their winnings ways are working their way back into regular stride.