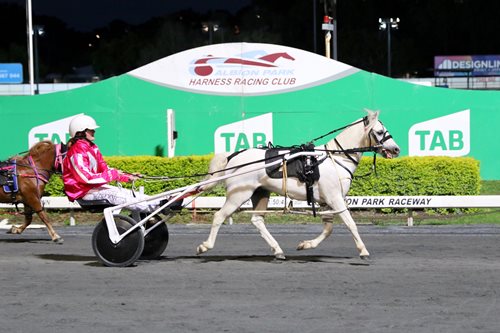 Talented youngster Meaghan McNee has set her sights on joining the training ranks in Queensland following her triumph in the Bev and Bill McKiernan Christmas Marathon earlier this month.

The daughter of trainer Mark McNee, Meaghan – who is 16 years of age – has developed a close bond and relationship with pony Fast Forward in recent years.

According to Mark, the shy Meaghan has come out of her shell after spending more time with Fast Forward, who she claimed the recent Christmas Shield win with at Albion Park.

As part of the Queensland Junior Harness Racing Association, Meaghan and Fast Forward finished second in the first race of the night before winning the Bev and Bill McKiernan Christmas Marathon, therefore taking out the Christmas Shield and driver of the night. 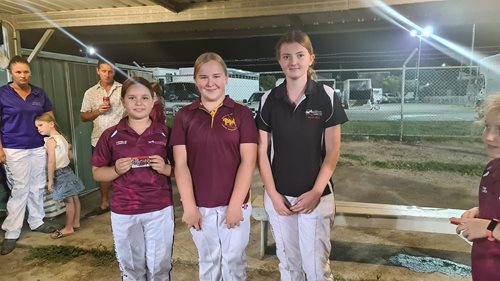 “It was a shock as she had not raced in a few months because of her year 11 studies,” Mark said of Meaghan’s achievement.

“I never got a chance to watch the races as my horses were in that night and I was doing stuff with them so I was just listening.

“It was a shock to hear Fast Forward win the Christmas Cup, it is such a highlight for her as she has always lived in her sister’s shadow as Madison has won everything, but it is funny that Madison never won this race.”

While Meaghan was learning the ropes of the harness game in her younger years, her older sister Madison was on a similar path to what she is now.

The now 21-year-old Madison often went interstate racing with her pony, with Meaghan regularly at the races showing her support.

Through her sister and father’s involvement, Meaghan jumped right into racing, before spending time away from the pacers, but returning as she got older.

Mark, who prepares a small team of pacers at Redcliffe as well as shoeing a few on the side, detailed that while Meaghan was shy in her younger days, her pony Fast Forward has changed all that.

“There was a pony for sale called Fast Forward, he was just a nice, slow steady pony that was probably going to be good for her,” he said.

“When we bought her, we were told he does not like men much, but he took too Meaghan and it is the best money I have ever spent.

“Fast Forward has brought Meaghan out of her shell and has gone on it from there.

“She is pretty meticulous on everything she does with him, he is not just pulled out of the paddock on race day and then taken to the races, she does a lot with him.”

Meaghan looks up to the Sydney-based Rickie Alchin, who is a regular in the Sunshine State come carnival every years, and is a closer follower of top trotter Tough Monarch.

While the teenager has made a name for herself in the junior driving arena, her father believes she is likely to pursue training as she progresses in the industry, with the potential to also drive.

Mark jokes that his keen training daughter will often tell him how to prepare his pacers, such is her eagerness for the sport.

“Being 16 now, she is right in the training aspect of things,” he said.

“She could take that next level to drive in races if she wishes too as she does drive ok, she does a bit of track work for me.

“She picks things up with my race horses, she tells me things that are happening in races all over Australia and in New Zealand.

“She is fixated on racing and my wife will often say to us that she would like to have a meal at home that doesn’t involve speaking around horses and racing.

“She is invested in what is going on.”